A DJ who was at the Eastern Cape farm where Anele Hoyana, 40, was beaten to death with the butt of a rifle said farmer Fritz “Majeke” Joubert only pretended to be “pro-black”.

Zwelihle “DJ Zwesta” Mathe recounted how 45-year-old Joubert allegedly intimidated him and harassed his girlfriend, all while acting like a friend.

He said that he had been at the farm a few days ahead of an event on Wednesday – days before Saturday’s deadly altercation – in which Joubert was going to be ordained and integrated as part of the community’s traditional leadership.

Hoyana, a sangoma, was temporarily living at the farm with his family at the time of the attack.

In graphic videos circulating on social media, taken on Saturday, Joubert appears hysterical, calling Hoyana “Satan” before beating him with his fists and the rifle butt, causing fatal head injuries.

Mathe described unusual events involving Joubert, who he said he had known for about a year. “We used to hang out a lot. It was fun when everything was fine,” he said.

“He used to host people at his farm. There usually were both black and white people hanging out and having a good time. I even shot my music video there. He acted like a good guy, like he was pro-black, but this whole thing triggered me.”

Mathe described how Joubert had behaved like a “typical Afrikaner” by snapping at him and making him feel inferior for not agreeing with him.

Joubert apparently also got upset when Hoyana would disagree with him.

“It was my first time meeting Anele, but I didn’t understand why he [Joubert] was so aggressive towards him. They fought and disagreed a lot but made up,” said Mathe.

“I asked Anele why he was so tolerant and he said he could tame him [Joubert]. He trusted him.

“[Joubert] then touched my girlfriend in a provocative manner and I called him out but he apologised. That’s when I wanted to leave.”

Mathe said when he woke Joubert up to ask to leave at around 1am last Monday, he was told: “You don’t wake up a beast.”

“He cut his finger and smeared the blood on his face. He demanded a selfie, and enjoyed himself. I needed to tread carefully – the farm is isolated and I could sense danger. He had been burning money earlier on. When we asked for money to get a cab, he burned some more notes and smeared a R200 note with blood and went back to sleep,” he said.

“I have never seen anyone smear blood on their face, demand to take selfies and smile while they were at it. It was the most horrifying experience.” 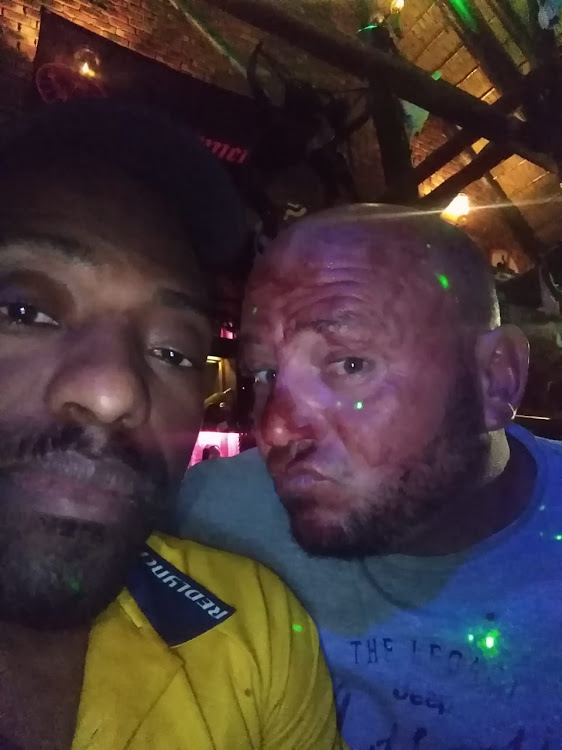 TimesLIVE was sent pictures of many of the events Mathe described, including the selfie.

Mathe said he escaped with his girlfriend during that night. A few days later, on Wednesday, the planned traditional event for took place – although Mathe wasn’t there.

“He loves guns, but he always said they are for hunting. He is establishing some kind of lion park at his farm for entertainment, so this was not alarming. My role was to sway the media and get coverage for the event – but I never got to, since I left early in the week. I’m glad I left,” he said.

The police have confirmed that officers shot Joubert dead in self-defence.

Eastern Cape police spokesperson Capt Hazel Mqala said Joubert and Hoyana had an argument that escalated into a physical fight and moved outside the house onto the deck.

“The farm owner assaulted this 40-year-old male ‘friend’ with his fists and a rifle butt, resulting in the victim sustaining severe head injuries. When the police arrived, they found him lying on his back with numerous head injuries and already passed on,” said Mqala.

The brutal events of that night, which also saw Joubert grab Hoyana’s two children – one a two-week-old baby, the other a two-year-old toddler – and lock them in a bathroom, were recorded in two macabre cellphone videos that Joubert posted on social media before his death.

The first video, filmed at 4.54am on Saturday, depicts a red-faced Joubert in a Springbok jersey, calling himself “the chosen one”. In a slurred voice he shouts, “Amandla! Viva!”, before moving the camera to Hoyana, who sits at the bar with his head bowed.

Joubert, panting, proclaims: “Everyone thinks I am mal, but I want to show the world to know how Satan [points at Hoyana] sits there.”

Officers later found Hoyana’s children in the bathroom, where they had been hiding in a bathtub. They are currently safe with their mother.

[GET THIS SONG's LYRICS HERE]

How Good is this Song? Show Us By Rating it.

No votes so far! Be the first to rate this post.